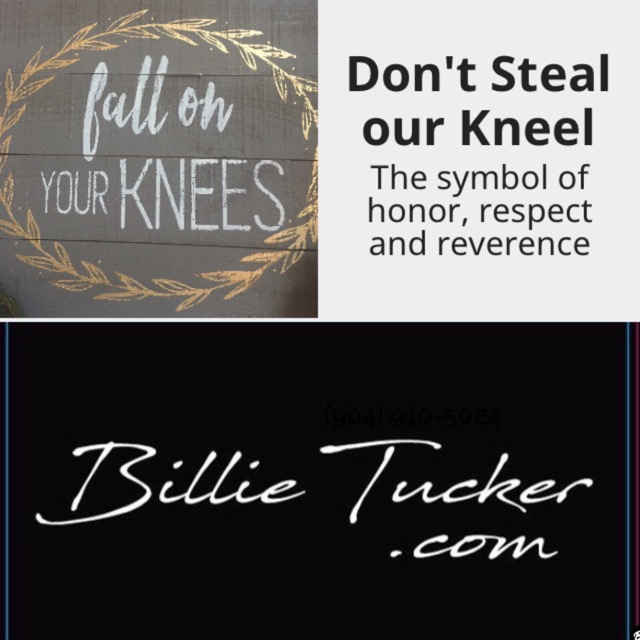 I was in my daughter’s home recently and she had the sign “Fall on Your Knees” displayed on her mantle.  This was one of many Christmas decorations in her home but this one stood out to me.

Because it hit me square between the eyes that the one thing we looked at as reverent and  honorable – kneeling – was recently stolen from us too.

We felt the kneeling by the NFL was an act of disrespect to the flag and our National Anthem…the two things that we honor together as Americans.  When the National Anthem plays — it doesn’t matter if you are black, white, red, purple, straight, gay, bi, Christian, Jew, Muslim, etc.  — we are all one — we are all Americans.  That’s why we hurt so much when we see them kneel on the playing field.  It’s dividing our nation instead of healing our nation and they just don’t seem to get it.

As I stood there reading the sign on her mantle, I thought:  Kneeling was also tainted for political purposes – not just the flag and National Anthem.  We were hit by a triple whammy!

The beautiful symbol of kneeling in prayer or in asking your beloved for their hand in marriage is now a symbol of defiance instead of reverence!  Oh we humans — we just mess up so many things up, don’t we?

The truth of the matter is this:

When they – the teams — defied us — we defied them.  That’s how it works.  The very thing they wanted to bring attention to — only broke us apart even more.  Defiance didn’t work and usually never does.

The only kind of kneeling that works is one to our maker.  He’s got the winning playbook and we humans are just too stubborn to read it.  I know the times I’ve had to kneel in petition to God and in reverence to Him — I won the game of life.  The truth of the matter is this:

Kneeling in prayer is our only hope.

If we take a knee for Him, all the wounds of our nation and our own personal wounds, will be healed.

No matter what the news reports or the defiance that seems to be everywhere — God is still on His Throne and He’s not surprised by any of this.  He’s seen this stuff before.  It’s the “same-old, same-old” playbook by Satan to divide and conquer families, businesses and nations.

Defiance is always the heart of the matter and the core subject of why we have so many broken relationships.

It started in the Garden of Eden when Adam and Eve defied God — because they wanted to be as smart as God (’cause Satan told them they would be — stinking liar!).  Their defiance didn’t work for them and it isn’t working for us.

When oh when shall we learn this lesson?  Why defy when obey brings us peace?  The mystery of man — seeking peace in all the wrong places!

My friend, as you celebrate this Christmas, I hope you’ll be reminded that the only kneeling we need to be concerned with is this:

“Every knee will bow and every tongue will confess that Jesus Christ is Lord.”

One day — when the skies open up and Jesus descends from Heaven, ALL men will kneel as the trumpets blare and the angels sing the National Anthem of Heaven!  The heavenly stadiums will be filled with those who love the Lord and we will worship and adore Him forever and ever and ever and ever!

I hope to see you there.  I’ve got my ticket and I’m hanging on to it for dear life!  My eternal dear life that is.  And the cool thing is this:  Jesus purchased my ticket for me.  I didn’t have to pay for it – he paid for it with His life.  He hands free tickets out to those who believe in Him.

I am praying you’ll ask for your free ticket today.  What are you waiting for?  Peace is yours when He hands you the ticket!

Billie has spent nearly 30 years helping CEOs through executive coaching, leadership development and board governance. She became well known throughout Florida for promoting and building CEO roundtables in every major city for Vistage Florida, a think tank for CEOs. She has earned a reputation for her keen understanding of the motivations, challenges and goals of people and has become a life-long student/teacher of leadership. She craves anything leadership related and enjoys being around the world of CEOs and executive teams. She respects the risks they take, the decision making processes they use and the jobs they create for their fellow man. She has emerged as a key resource for those who want to understand insights about business, executives, management teams and board dynamics.  And she especially loves the Leader of all – her Lord and Savior Jesus Christ!