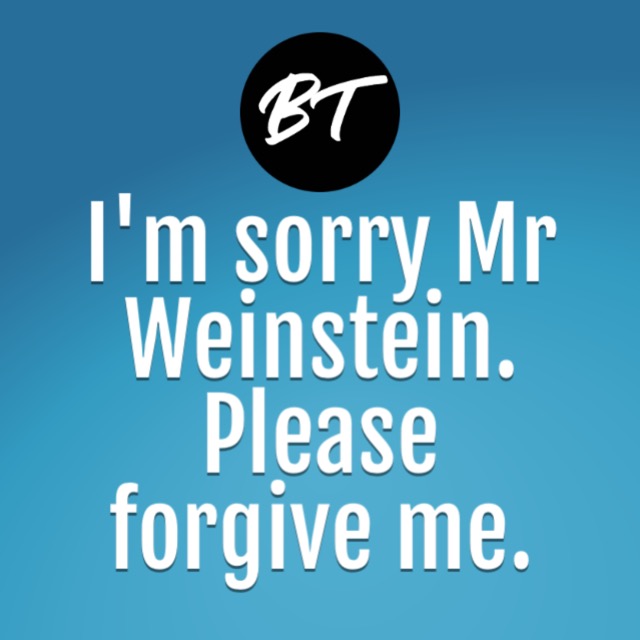 As we all watched Hollywood and Political Giants condemn the acts of Harvey Weinstein, I actually jumped into the condemnation crowd myself.

For that I apologize to Mr. Weinstein. I don’t know him. I only know what I watched and read and after a good night’s sleep, I woke up with a different viewpoint of the matter. You see, I rested in the arms of Jesus last night and He let me know, “I love Harvey Weinstein too.”

Gulp. Yes, He does. And my place is not to be in the crowd screaming “Crucify Him.” I am to be on the cross saying “Father, please forgive them for they know not what they do.”

I have a long way to go in my walk of faith and every day I’ll re-evaluate how I did and try to do better the next day. And, I must say, I forgave Donald Trump for his remarks years ago so why wouldn’t I give Mr. Weinstein the same forgiveness? I do and I must.  I’m sorry, Mr. Weinstein, please forgive me for not praying for you instead of condemning you.

I believe Mr. Weinstein is scared out of his mind. He’s in disbelief that those who took his money; shared in his shenanigans themselves; and let him get away with his behaviors for years — are now turning on him. He is looking around and no one is there to stand with him.

Those are the two choices we always have on the floor of desperation.

I hope Mr. Weinstein chooses Change and I’ll be praying for him as he fights the demons of his life. (Those same demons were the ones who said, “Do it” and are now “condemning him for doing it.” Damn demons twist us up and ruin everything!) I pray those he hurt will find a way to forgive him — and change too.

Change too? Why, Billie, they are victims of this madman. Why should they change?

I will get ridiculed for this thought and that’s okay. Those who want to accuse me of being insensitive to the victims don’t know my story. You see, I had to find a way to change my behaviors as a victim myself.  I too suffered what they did and I know I played a part in that by silencing my voice.

A few men abused me in my life. The first was a friend of my Dad’s.  He touched me inappropriately and my father never knew what he did. Why? Because I feared speaking up – I was only 10 years old.  I silenced my voice.

Young women of Hollywood are no different than young women in the business world out here in America. Many of us have suffered the fear of saying “No” when a co-worker, possibly our boss, has groped us or said inappropriate things in the workplace.   This is not a Hollywood issue – it’s an issue.

It’s one I also had to deal with as a young, cute woman in the workforce. I blushed at inappropriate remarks or touches. Because of my innocence and my lack of courage, I said nothing. I silenced my voice again.

It wasn’t the man’s fault; it was mine for not standing up to him and slapping the bajebers out of him. I didn’t do it because I feared losing my job so I quietly took his pokes and remarks and smiled and got out of the room as fast as I could. It was a terrible time in my life but I learned a lot of lessons from it too.  That’s what life is about – learning the lessons!

As life went on, I watched Human Resource Departments put courses in place to address this very issue. We talked about these kinds of behaviors not being appropriate and we made changes to the business world. We had a safe place to go to and report those events if they happened. We’ve made changes for the good in business and we will continue to do better because of incidents like this. (By the way, I can see that Ben Affleck video being used by HR departments as a tool of “What would you do if this happened to you.”) You see – good always comes out of bad situations!

Hollywood now needs to re-evaluate their own culture and this just may be the thing that helps them do just that.

From our perspective out here in America, Hollywood has become a cesspool of wickedness and elitism.  They are prideful and full of themselves. What once was a beautiful industry has become filled with darkness and the Hollywood lights are going out if they don’t make some major changes starting now.

Can’t you just feel the fear in the atmosphere?  There are many people in the Hollywood elite waking up today petrified they are next on the chopping block of hypocrisy.  Those people are now falling on their knees in fear and prayer.  This is good. This is their awakening! This is how change will happen.

There is an awakening in America too. It’s everywhere. It’s in our homes. It’s in our educational system. It’s in our church. It’s in our political structure. It’s in the entertainment industry. You can see it. You can feel it.  It’s all crumbling and the truth is setting us free from the dark demons that took us there. (Damn, demons! Did I mention I hate them?)

I am so thankful to be alive to see it crumble!  I’ve been praying for this and it’s cool to see your payers answered.

We are there, my friends. We are watching the unraveling and it’s all good! Mr. Weinstein had no idea his life might be the thing that changes not just Hollywood but the world too.  We can all learn from him and become better human beings. See how God works? He takes bad stuff and uses it for good, all the time!

Note to Mr. Weinstein: I’ll be praying for you. Sure would love to see some great movies about God, Love and the best of Humankind come from this terrible time in your life.   How cool would that be?  I know you would do great work if you work for Him who gave you those beautiful talents you have.  Here’s the key: Accept responsibility and the consequences of your decisions.  Pray for a change in your heart.  Change your life for the better.

Note to my readers: By the way – it’s not just men who do this stuff. Women do it too so let’s not turn this into a man-bashing issue. The demons would love to do that! That’s their strategy! Let’s not fall into that vortex and let them win.

Note to my abusers: You’re forgiven. Now go in peace.

Note to the demons: Go to hell. We are on to you! Get ready for your time has come! The Awakening you feared is upon you.

Note to my fellow Americans:  God bless America – we are awake, aware and alive in a precious time in history!  Let’s not waste it.  Go out and LOVE someone today.  Break off those chains and go change the world for the better.

What a great time to be alive!  It’s Amazing!

Billie has spent nearly 30 years helping CEOs through executive coaching, leadership development and board governance. She became well known throughout Florida for promoting and building CEO roundtables in every major city for Vistage Florida, a think tank for CEOs. She has earned a reputation for her keen understanding of the motivations, challenges and goals of people and has become a life-long student/teacher of leadership. She craves anything leadership related and enjoys being around the world of CEOs and executive teams. She respects the risks they take, the decision making processes they use and the jobs they create for their fellow man. She has emerged as a key resource for those who want to understand insights about business, executives, management teams and board dynamics.