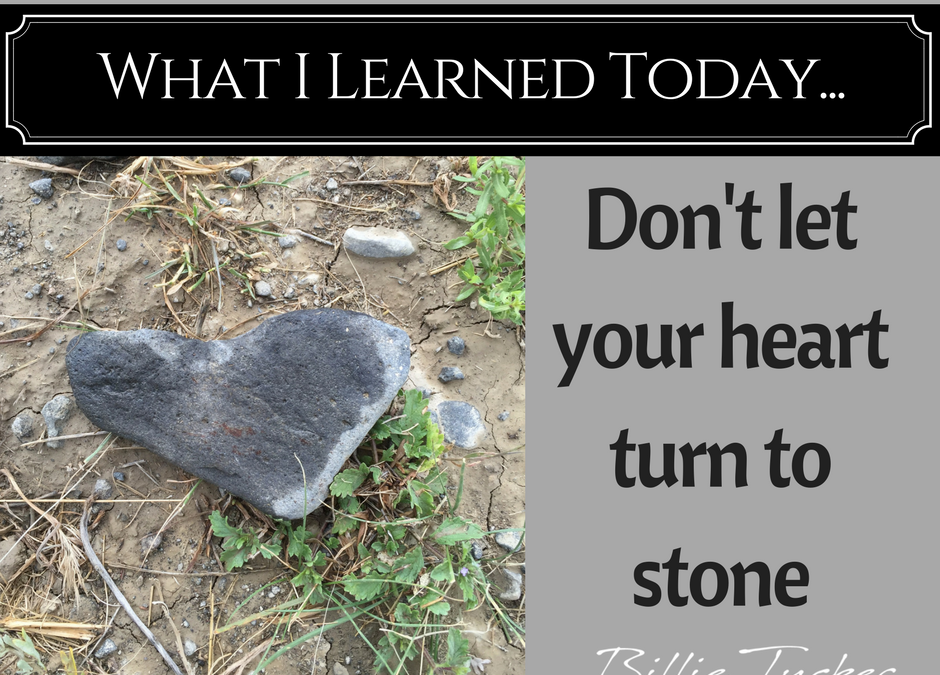 While I was in Wyoming, I met a woman who has a beautiful ranch and invites all her friends and family to join her every summer for fun and relaxation. The atmosphere at her ranch is very soothing and everyone there seems so happy and fulfilled.

No drama happens. She doesn’t allow it.

It’s her and her husband’s retreat from the busyness of their California life. This is their sanctuary where hearts come to rest and heal.

One of the activities she encourages her guests to do is look for heart rocks along the mountain paths on her property.

I asked her if they found any and she took me to a ledge on the side of the house and there they were – a beautiful selection of heart rocks! She told me this selection were only a few rocks because most ended up in the suitcases of her guests who wanted to take their heart rock home to remember their time on her ranch. I was amazed there were so many rocks shaped like hearts and from then on, I, too started looking for heart rocks whenever I was “among the rocks.”

I wondered how heart shaped rocks could happen. It didn’t seem possible that they could “just happen” and of course people who believe in evolution think they do. I tend to believe that the One who made the earth decided to leave behind His signature pieces shaped like hearts.

I’ll never forget the day one of our ranch hands on another ranch I was consulting with came flying up on her 4-wheeler with a huge rock in her hands. The rock was a heart rock! She handed it off to the rancher and told him it was for him. She wanted to give it to him because he had gone above the call of duty as her boss and purchased new tires for her worn-out tires on her worn-out vehicle. He had noticed they were bald and he was concerned about her safety and had tires put on them – at no cost to her. It was a generous gift and showed the heart of the rancher. Less than ten days later, that same ranch hand resigned and left quickly for another job in another state. She mumbled something about not being appreciated and off she went to find someone who did.

I was stunned by her actions and I could see the rancher was too. He’s a man —  so he took it to “heart” and didn’t show his emotions. I’m a woman  — and my instincts were to stand up for him and tell her to take a drive off the side of a mountain.  My heart hurt for him because I knew he thought he had done all he could for this employee.

As a consultant, I see this often.

I’ve also seen employees do all they can and work hard yet feel unappreciated by their employers. They feel they have no voice because if they speak, they will be fired. So instead, they take off to the next job to find value and appreciation.

It’s a vicious cycle in the business world and way too often hearts are hardened because of lack of communication and misunderstandings.

And this stuff happens in our personal relationships too! You know what I mean. You’ve seen it. You may have experienced it too.

My wish for you is that you will create an environment around you like the woman who opened her ranch to her friends and family. No drama was allowed in. It was all about rest, relaxation and communion with each other and nature. And, collecting heart shaped rocks will keep human hearts soft.

And my sweetheart friends – if you are holding resentment against someone and you think it’s just best to leave, I encourage you to have a heart-to-heart talk with that person.   Heading out to another person or another job is never the answer if you are leaving with a hard heart.

You are taking that heart with you in the suitcase of your life. It’s baggage you don’t need!

Keep your hearts soft and vow to never let it harden because you failed to speak your mind and say your piece.

Keep the peace instead.

God bless you and may your heart beat again – softly and tenderly – always and forever!