How high do you want to go in life? It’s all about the soil, my friend. 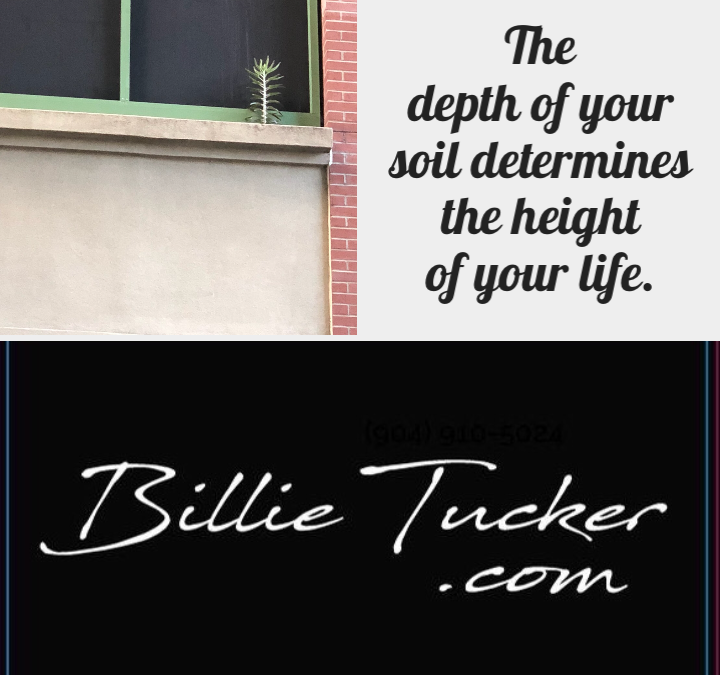 I had been in a business meeting most of the day and had taken a walk to “walk out” what I heard.

I had facilitated a meeting with a group of business owners.  They were all leaders in their own rights and came to the table with wisdom, insights and expertise in their fields of endeavor.

I have worked with CEOs for over 30 years and they are some of my favorite people.  They are risk takers and they don’t let punches of life take them down.  They get back up and learn from those punches.  They keep going when it doesn’t look hopeful.  It’s as if they see something the rest of us don’t.  They always see a light at the end of the tunnel and they see opportunities where most of us see obstacles.

I am always energized when I have the honor of being in a room with leaders.  I soak up their knowledge and try to apply their wisdom to my own life goals.  Leadership is my favorite beverage of life!

One CEO at the table had mentioned to another — “If you are going to grow this business, you need to have enough “soil” or aka “foundational structure such as money, time, energy, etc” or you’ll burn out quickly.”  It was great advice and everyone shook their heads acknowledging his words.

They heard him and knew he was right.  Why?  Because most of them had been there before and learned their lessons well about planting business ideas on a good foundation!  You get wisdom from making bad mistakes which means some of them had probably planted ideas in shallow soil at one time in their life.  But one thing was certain, they had overcome those times and had deep soil now in their businesses and their personal lives.

So how cool was it when I took my walk and decided to stop for a minute to rest between two large condo buildings on the River Walk.  As I sat down on a bench between the two buildings, I looked up at the sound of a bird calling out to me.  And there she was — A baby tree growing on the ledge of a window sill.  There was a large tree next to the building and evidently a seed had dropped on that sill and with just a little dirt – had managed to grow.

She was doing all she could to hold on to that little bit of soil but I knew – she would never be the big tree that was rooted firmly in the ground below her.  She had limitations and as hard as she tried, she would eventually die from the heat and lack of enough soil.  She just didn’t have what it would take to grow.  Poor thing, I thought.

But…I was thrilled to see this perfect example of the CEO’s wisdom right there on the window sill.  And I knew that another wise teacher had spoken these same words long ago.  That teacher was Jesus and what he said below still applied today.  Absolutely nothing had changed from 2,000 years ago to today.  The wisdom of the ages had shown up in the conference room today out of the mouth of a successful CEO.  What did Jesus say?

“Listen! A farmer went out to plant some seeds. As he scattered them across his field, some seeds fell on a footpath, and the birds came and ate them. Other seeds fell on shallow soil with underlying rock. The seeds sprouted quickly because the soil was shallow. But the plants soon wilted under the hot sun, and since they didn’t have deep roots, they died. Other seeds fell among thorns that grew up and choked out the tender plants. Still other seeds fell on fertile soil, and they produced a crop that was thirty, sixty, and even a hundred times as much as had been planted! Anyone with ears to hear should listen and understand.”

I thanked God for once again loving me enough to show up in strange and beautiful ways.  That tiny tree trying her best to be a big tree was a picture I’ll never forget.  And that my friends is why I always keep my eyes open to see the beauty of God’s glory everywhere I go.  I look for it.  I thirst for it.  I seek it.  And I’m willing to say out loud – “I believe in it.”

Today is Friday and all of you are looking forward to a calm and peaceful weekend.  I hope you get it.  And I hope you’ll take time to watch, look and as Jesus stated, “use your ears to hear and understand” what messages God is speaking into your life.  Be willing to listen to wise counsel from others too.  Especially others who have been there and done that.  God does use others to speak wisdom into you.  You just have to be soft enough in your heart to hear the words and soak them in.

Look for God’s pictures this weekend.  Listen for others words of wisdom.  And know that I am…

Thankful for each of you and I wish you rich, deep soil in all your endeavors.