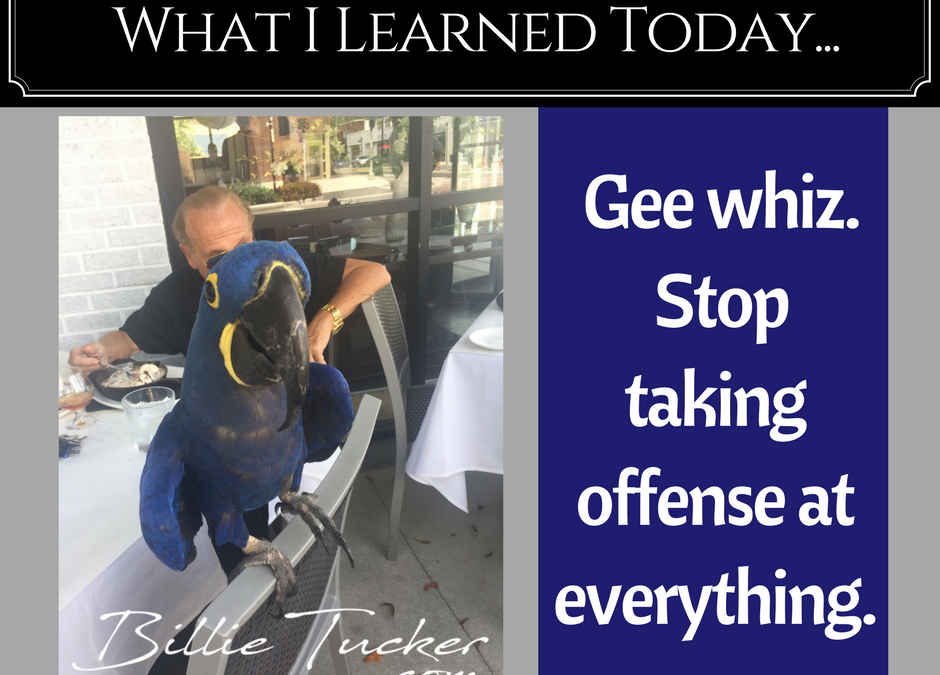 Warning:  This blog has some political statements in it.  You might be offended.  Oh well too bad.  I learned my lesson well, you can’t please everyone so you got to please yourself.

We were laughing and sharing our favorite thing about the restaurant as we were leaving.

Just as we walked through the doors to the outside courtyard a large blue bird caught our attention. It was beautiful and so out of place on the back of a chair outside a restaurant.

The owner was eating his lunch. We gasped and took out our phones to take a picture. I asked:   “Can I get a picture of your bird.” His answer was “yes.”

I spoke to the bird and said “Can you pose for me?” and you know what – it did! I guess the bird had been here before and knew it was a star.

I engaged in a short conversation with the bird’s owner – because that is what I do. I talk to everyone and try to make them feel “important, “human” and “seen.” So this bird’s owner was no different and I asked him a few questions:

Me: “Oh how sweet. Do you have a girlfriend?” – asking the bird the question just in a joking sort of way. You know – to keep the conversation going.

Me: “I’m sorry you don’t have a girlfriend.”

I looked at the owner and he was glaring over his blue sunglasses and I knew immediately – he was offended.  He didn’t like where the conversation had gone.  Whew.

My feelings were hurt. I had meant no harm. I was just being me – engaging with someone who had brought a big blue bird to a restaurant. It’s not something you see every day and I would assume – as the bird owner – people would engage with you about your bird.

How silly of me. I should have known better than to acknowledge something so big in my face.

I shall now go to a political statement here so if you don’t agree with me – I’m sorry.

Last Friday we watched as Senator John McCain sided with the Democrats and refused to repeal the largest tax increase in America – even though he had said for years it needed to be repealed.

Before he voted it down, he told the press to “watch the show” and then proceeded to put one on.

His vote will not affect him. He will get the best of high class, quality care for his brain cancer. Others of us will not be afforded what he will get and some of us will die because of it.

I was stunned, shocked and could not understand why he would vote it down.

And then I heard the truth. He did it to get back at President Trump. He doesn’t like Trump and he was offended when Trump questioned his war hero status. And since that vote, the stories hidden from us for so long have come out. Just this one article alone tells the truth about McCain’s vindictive personality.

So here’s the kicker. McCain took offense at Trump and decided to get back at him using We the People as his tool.

And then let’s not forget the snowflakes who take offense at everything. Things that never mattered before are the reasons for taking down monuments and creating safe spaces from the same people who riot in the streets.

My head and heart hurts from all the offended people.

I want to go back to a place where you could have a conversation without everyone getting offended. It was called “conversation.” You didn’t always agree but you did agree to disagree.

You could debate issues on the floor of the Senate and walk across the aisle and vote for what’s best for the people – not you or your party.

You could take your kids to a monument and talk about the good and bad of those times so your children understood the whole truth of the issue.

And if you decided to bring your blue bird to a restaurant – you didn’t get offended if someone wanted to engage with you about this beautiful creature.

It’s a tough world to live in right now my friends and the lesson I leave you with this morning is this:

And as you go about your day today – remember this –

“You will get offended. You may offend someone else without even knowing it. Just do what you think is right, my friend. We can’t please everyone so you’ve got to please yourself.”

Did you know that this song “Garden Party” was written by Ricky Nelson because he was booed off the stage at a concert at Madison Square Garden.  The people were offended and so was Ricky Nelson.