Lessons from the back of a coffee can. Go figure! 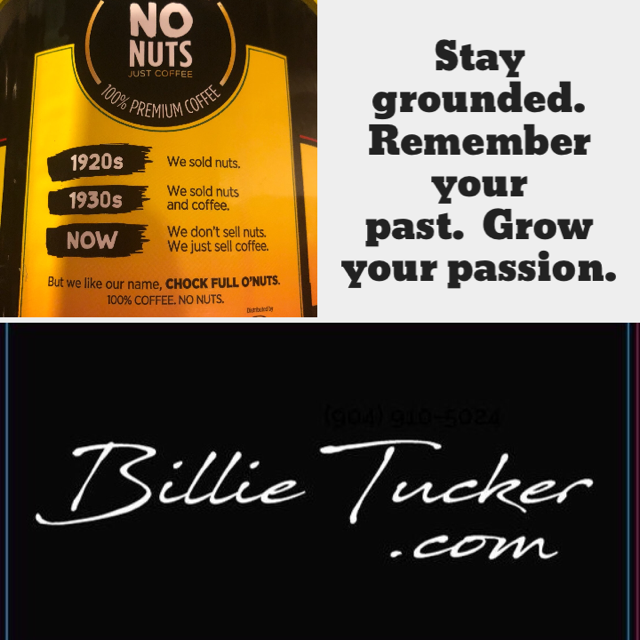 I pulled out the coffee tin to make my favorite beverage of the day – my morning coffee.  The black and yellow coffee can — Chock full of Nuts — had become a part of my life more than 40 years ago as a young wife.

My ex-husband loved his Chock Full of Nuts coffee and I did not drink coffee at the time.  But, I wanted to join him in his love of that coffee so I held my nose and filled a cup full of milk and spoon full’s of sugar and a little bit of coffee and joined him in his coffee drinking sessions as he studied in the wee hours of the morning at the University of Florida.

As the years went on, however, I poured less milk, eliminated the sugar and eventually learned to drink my coffee black.

Over the years I tried different coffee brands and always came back to my favorite one with the funny name.  Even when we lived in Texas, my mother in law would ship us a can every now and then because we could not find it in the HEB grocery store in Corpus Christi.

As I scooped out the coffee, I noticed the can had a different message on the back of it.  I picked it up and read the history of how that funny name came to be.  It amused me they started their company making nuts, added coffee to their product line ten years later, and then ditched the nuts to only sell coffee.  But they loved the name and kept it and now on the back of the can “No Nuts – Just Coffee” was a part of their logo.

Can’t you just imagine the executives sitting in a board room at Chock full of Nuts talking about getting rid of their nut product.  There were some in the room screaming that would be horrible and others who knew it was time for a change.  The debates must have been fierce at times and eventually those discussions turned into the company’s history now sitting on the back of the can.

As the coffee brewed and the condo filled with the aroma that makes your soul wake up, I thought about my own past and wondered if I could put my past into 3 bullet points on the back of my Can of Life.  I am in my 60’s now and was married 38 years  –  most of my life.  So I decided my bullet points would be:

The coffee was ready.  I poured my Chock into a cup my son recently gave me for Mother’s Day.  My Mom and Activist cup! And I laughed out loud in the kitchen by myself – the Single Billie of today — and realized that all those changes, good and bad, were now my history!  I had made it.  I had screamed like those in the Chock board room.  Screamed that I didn’t want to change.  I went NUTS at times trying to keep things as they were.  But try as I might, it was time to change and change I did.

But Billie — was always there.  She was grounded in the coffee cup of her life.  And that grounding came from finding Jesus, learning about Him, leaning into Him, praising Him and growing with Him.

And where I am Now will change into another Now and there is no telling what will happen.  But Billie knows this — she will always be Billie and being Billie isn’t so bad after all.  I’ve learned to love Billie because she is hand made by God and has her own special blend to give to this world.

Being you isn’t bad either.  You, too, are a special blend of a person.  God roasted your soul in the kitchen in heaven and He sent you down here to make the world a better place.  Yes, a better place.  That’s our job and many in this world have forgotten that.  Don’t you forget it.  Be grounded in that fact!

Did you know:  The aroma of your life affects those who hold you in theirs.

Maybe it’s time for you to write the back of a coffee can version of where you are today.  Might I suggest you do that?  And you just might need to throw off those things holding you back from growing into tomorrow and when you do —  always stay grounded in who God made you to be.  Never leave you behind as you grow!

Today is NOW!  And ten years from now – it will be another NOW.  What are you waiting for?  The coffee has brewed – it’s time to drink up and live your life NOW.  If you need to add a little sugar or some heavy cream to it – go for it.  Sweeten the world and make your part of it a little better.  The world needs a little sweetening.