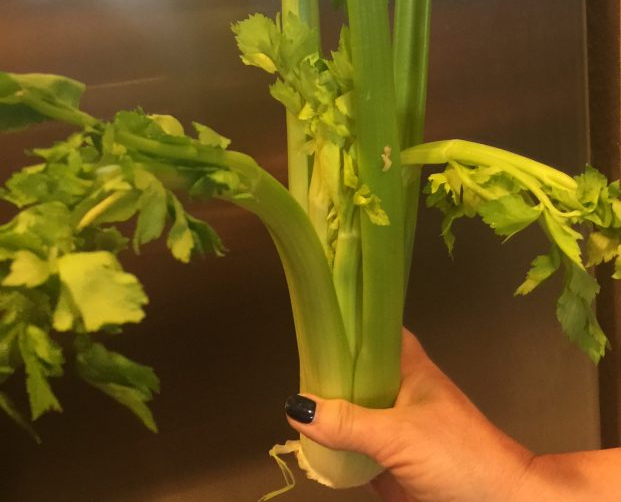 I was annoyed at myself. There was way too much food that had gone bad in the refrigerator.

As I threw a bunch of grapes with white “fur” on them into the trash, I could hear my dad saying “Waste not, want not.”

A single dad raised my sister, brother and me and he didn’t have any extra money to spare on needless things. He spent his hard earned dollars on things we needed such as food, housing and a few clothing items in our closets.

Wasting food was not a luxury. I even remember one night when my older sister was taking care of us (in today’s terms that would mean we would be reported to HRS because she was only 12), and she fixed us a bowl of cereal and milk that she had watered down to ensure all 3 of us had some.

Yes, I grew up in a poor-to-middle class neighborhood and I’m proud of all my dad did to ensure we grew up to be great American citizens who learned the value of hard work.

He did his best.  He worked more than one job most of his life and some of those jobs were menial. He just did what he had to do. I’m proud of him!

So when I opened the refrigerator and saw the furry grapes, I was mad at myself. Mad because I knew better.

When I lived in my home, I could at least feed the wild life the furry grapes but I now lived in a condo in the sky and the only place to throw the grapes was in the trash.

I decided to clean out the refrigerator to see what else might be near “furry status” and I found more! Dang it, Billie!

Wimpy celery stalks fell over my wrists instead of standing up tall and proud. I winced as I dumped them into the trash with the furry grapes.

Two tomatoes with softened skin seemed to sense my discomfort at their turning as I cut away the bad parts on the cutting board.   I saved a little of what was left and threw the bad parts on top of the celery staring at me from the trash can.

And yes, even the basil I bought for the tomato and mozzarella salad was now that dark, dark green – you know the green – moldy green.

As I cleaned out the refrigerator, I decided to make a refrigerator soup from the stuff that was left – that had not ended up in the trashcan!

Refrigerator soup is a term used by my family when I was growing up. To ensure food didn’t go bad, and because we were tired of leftovers, we would take all the stuff and turn it into a pot of soup.

Nothing went to waste and every Sunday that pot of soup would be cooking and we never knew how it would taste. It was always different based on what we had eaten that week.

The flavors of a scoop of creamed peas, a piece of tough Salisbury steak, penny carrot salad (look that up), not-wimpy celery, and always a whole onion might be in the pot.

Refrigerator soup became Sunday night dinner along with a slice of white bread covered with butter – or oleo when money was tight! Yep, back then white bread was a good thing and you didn’t have to worry about gluten!

As my pot of soup began to take shape, I hauled the trash to the trash shoot in my building. I felt so guilty hauling the once lovely veggies and fruits to their ultimate doom. It wasn’t what they had expected. They wanted more from life than to be tossed into that shoot inside a plastic garbage bag tied tightly so they would not leak out.

I apologized to them as I let the bag drop and I walked back to my condo still beating myself up for the waste I had created.

When I entered the condo, the smell of the refrigerator soup encouraged me to let it go. To forgive myself for being so foolish and to promise myself that would never happen again.

I lifted the lid on the pot and stood back to let the steam roll away and when I looked at those veggies swirling together, I wondered what this soup would taste like when it was done.  It looked good but…you never know!

But I did know this. I had learned some lessons today and never would have believed wimpy, fuzzy food would be my teachers:

Don’t buy more than you need. Like my dad, he had to watch his pennies so he carefully considered everything he purchased. I had purchased way too much food for myself and because of my time constraints; I had wasted not just food – but money. This applies to “stuff” in your life. That old saying, “Less is more” is truth!

Everyone has potential and you may be the one to help him or her achieve it. Those grapes would have made a wonderful salad to share with others and the wimpy celery stalks could have become little boats to house pimento cheese. Because I ignored them, they rotted right there while under my care! Have you paid attention to the potential in others in your life? Can you do something to help them be the success they were MEANT to be? Have you ignored your own potential? Don’t throw away your potential and have it end up in a trash heap rotting away!   The world needs great grapes and strong celery stalks!

Clean out your life at least once a week. You know what I mean here. If you have let some dirt inside your home or inside your soul’s home, maybe Sunday is a good day to reflect on that dirt and take it to the trash! Keep your life and your heart clean from the dirt of this world.  And don’t be mad at yourself. Sometimes you are only a “little rotten” and you can cut out the bad stuff and let the good stuff continue to make this world a better place. Just imagine yourself as part of the Refrigerator Soup of America!

Enjoy your week. As you plan your menus for the week think about this — some of those leftovers can be used for a great Sunday soup next week!  Don’t throw anything away and instead toss the leftovers in a big pot and blend those flavors together!