Lessons Learned: Be a Good Spoon 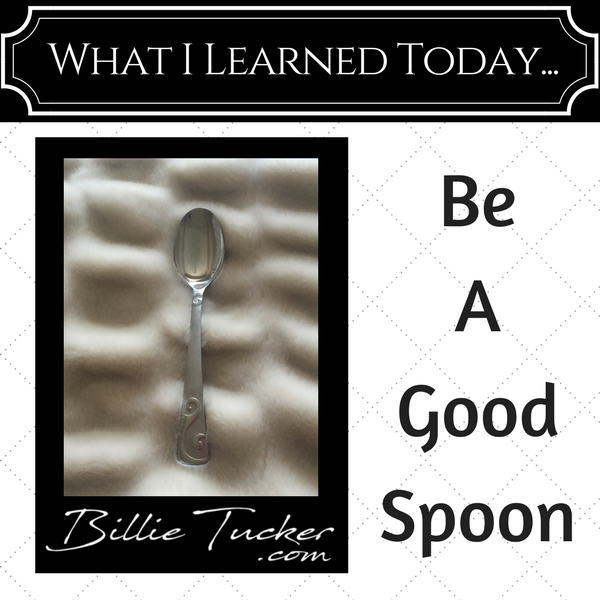 I knew a lesson was coming. It had to do with SPOONS. I know, crazy isn’t it?

Three things happened with the issue of spoons during the July 4th festivities in my condo:

Spoons. That’s my lesson?  What in the world was going on?  Three spoon issues had shown up and that meant — it was a lesson!

So today I took some time to research “spoons” and guess what…yep they are pretty cool and I never knew they meant so much to our world.  Here are a few facts:

So there you go – your lesson for the day: Spoons!  There were posts about knives and forks and I didn’t go there.  Spoons were on my mind and were to be the lesson I learned today.

So what did I need to learn from this encounter with the spoon issue on July 4th: I think this sums it up pretty well:

To feed us. To scoop up the last of the sauce in the meatball dish or the last bit of ice cream.  Try doing that with a fork or a knife!

For gift giving. Apostle spoons are a tradition long ago vanished but think about baby spoons with rubber tips. Almost the same thing!  We love our babies so much that we put rubber coatings on them to keep their sweet mouths from being hurt.  Spoons for babies are still an important tradition!

For ceremonies or special occasions. Back in the day Kings were anointed with them. Today, we stir pots with them and destroy ministries, friendships, nations and kingdoms.

And unfortunately, we have become a nation of pot stirrers instead of a nation of Good Spoons.   I never knew I would fall in love with a spoon but today, I did.

The spoons are always the first to go from the plastic cutlery box. Why? Because good stuff happens with spoons – sweet stuff – last of the sauce stuff.

My friends – crazy little blog post that it is – I hope you’ll learn to appreciate the Good Spoons who show up in your life —  and — be one yourself.  Let’s become a Nation of Good Spoons and use our talents, our voices, our leadership and our financial resources to do Good stuff.  That’s all that really matters anyway.  And what’s the Good Stuff?  Stuff that makes others feel good about themselves and about you.  If it don’t feel right, it ain’t right.  Quote me on that one!

And if a Bad Spoon shows up, don’t let the pot get stirred.  Call them out before they can do damage and throw them in the trash right away along with those worthless plastic knives!  Who came up with the idea of plastic knives anyway?  Really?

Well this was a fun blog.  And now maybe next time I’ll write about SPOONING – where two people behave in an amorous way; kiss and cuddle!  You never know what God will use to teach me a Lesson or two!