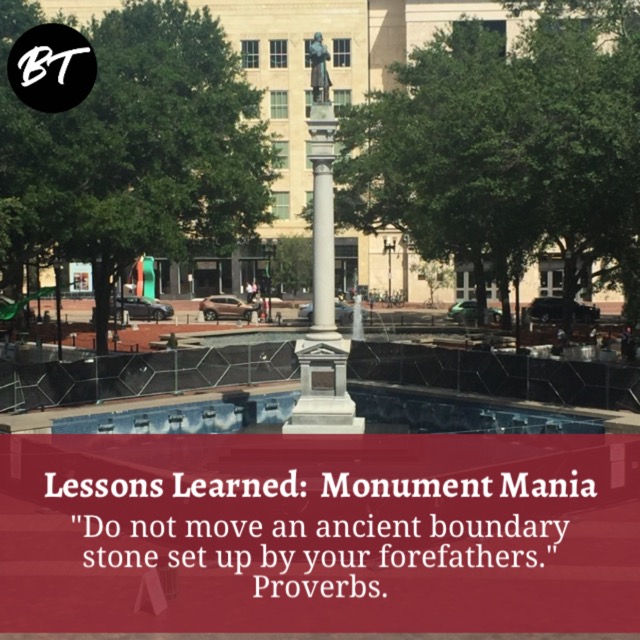 Dear Those Who Will Decide If We Take Down Monuments:

I’m just a citizen.  My voice is only one of many.  I pondered if I should write this and after much research on the monuments themselves; speaking with others on both sides of the issues; and prayer — I thought I would throw my opinion into the ring of this Monument Mania.

I titled my letter as Monument Mania because from my perspective, this is what it is.  Mania — as described by Webster’s is  —

disorganization of behavior and elevation of mood”

and for those who wish to understand what a Monument is, Webster’s has defined that as –

While I can appreciate the feelings of those who never once spoke out in more than a 100 years since these monuments were erected, I ask this question:

“What suddenly occurred to bring hyperactivity to your mental and physical state of mind regarding these monuments?”

I address this to the many leaders on both sides of the aisles who are calling for removal of these monuments too.  What suddenly made stone monuments the big issue of the day?

You, the very ones who have walked past these monuments day after day and year after year have never once fallen to the ground in heaps of sadness over the monument looming above you.  What suddenly happened to cause you to consider taking them down now?

I address this to the many paid speakers who have no idea what they are talking about yet use threats and intimidation that if these stone soldiers are not removed – war will break out in the streets.  How much were you paid to speak these words?  How much are you being paid to protest – scratch that – riot — against stone monuments?  To threaten, cajole and scream at public servants about an issue you really don’t care about.  The issue of the day you have been paid to protest – scratch that — riot about?

Why does the silent majority feel the monuments should stay?

“Because we are called to remind generations upon generations of the good and evil that was done to others on behalf of freedom.”

Whether we like what we see, it is what it is.  And those screaming for them to come down have one thing in mind – erase our past — BUT  — not the past they want to remember.

And the silent majority say — “No!”  Enough is enough.  Tell the truth, the whole truth or nothing but the truth – so help us God.

As public servants of the city, the state and this great Nation – you have been handed a big responsibility to uphold the law.  Be reminded of this:

It is your job to Protect All American Monuments in Perpetuity and if you need further information, please read the Act for yourself.

We KNOW you are being bullied, threatened via emails, calls and visits by the paid protestors – rioters  –  regarding taking these monuments down.  They are paid to do that.  Remember that.  And you were voted to uphold the law and not be intimidated by radicals and paid protestors – excuse me again – I mean — rioters.

I ask you to seek wise counsel and to uphold the law as you promised to do when you became a public servant.  You wanted the job and never expected this to show up.  It did and guess what – you have the tools to do your job and we believe you have the courage and boldness to do it as well.  Otherwise we would not have elected you for such a time as this.

The silent majority feels this is a distraction and bigger fish need to be fried?

Foolish Monument Mania is just one more tactic to take you off the issues that are more important to those you represent such as:  jobs, infrastructure, poverty, and crime.

Do not fall victim to foolish men or you, yourself, will become one

and we will notice that you did.

A little advice from the big guy who made us all:  “Do not entertain fools or argue with a foolish man.”

Those in the Monument Mania crowd are foolish paid rioters.  We expect wisdom from our public servants and know you will do the right thing.  We will pray for you and hope you’ll be in prayer too.  At this time in our history – prayer on our knees and then standing to fight for the rule of law — is necessary!

It is really a simple decision on your part — “Obey the Rule of Law – see above.”

Here are just a few pictures of the hypocrisy from the Monument Mania side.  These images will help you realize the importance of your vote to leave the Monuments where they are.  Send the rioters packing.  Ignore their threats.  Stand boldly against hypocrisy.  Be wise. The leader of the KKK stands in the Senate in DC. A Democrat and an honorable friend of the Clinton’s Honoring the woman who wanted black babies killed. Smithsonian will not take this down. Why? Hypocrisy?