Look up from your “handiwork” to see God’s! 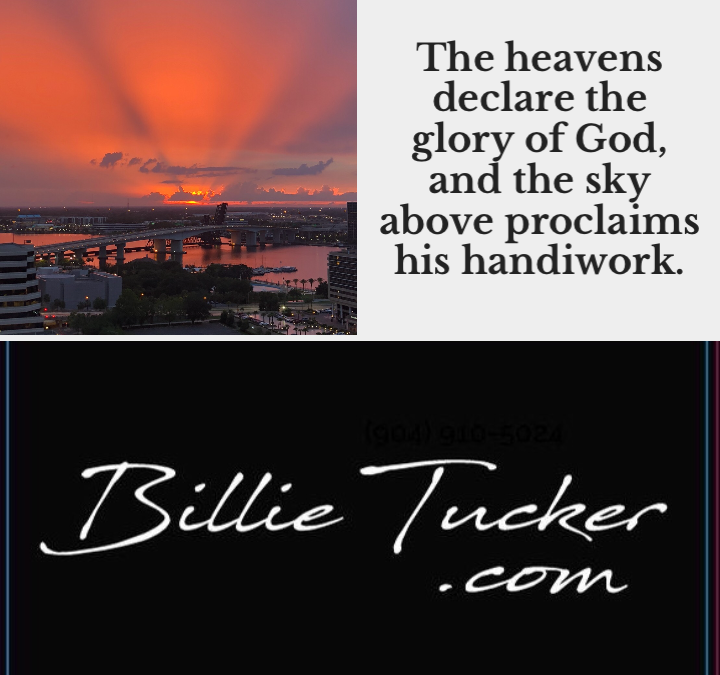 I snapped this picture from the balcony of my condo overlooking the St. Johns River.

The day had been very busy.  I had been at it all day with my work, phone calls, go-to-meetings, researching and writing.  There was so much to do and I had my head down for most of the day.

I didn’t even realize how late it was until I caught a red glimmer out of the corner of my eye.  When I stood up to see what it was, my heart pounded and immediately tears welled up and I began to shake because of the glory I was witnessing in my condo in the sky.

“Awesome God, thank you God, beautiful God, I love you God, you are all powerful God” poured from my soul trapped inside my earthly body.   I wanted to fly into the sky and join the host of angels declaring the glory of God but alas, I’m not able to do that yet.  One day.  One day.  But not this day.  I was transfixed watching the sun set and could not leave the balcony until it was finished.

I immediately posted this picture on social media and the comments and the likes kept coming.  It was as if I had hit the jackpot in heaven as people awed about the view.  Many shared it.  Others downloaded it on their phone as a screen saver.  And others sent messages telling me how they loved the sunrises from my condo.

I wondered why this picture had spoken to so many and I searched for scriptures to give me the clue.  There were many scriptures and when I read this one, I knew that was His message to us.  “Heaven.  Declarations.  Glory.  Proclaim.  Handiwork. God.”

Why did so many love the picture?  I think it’s because we know that there is something bigger than the “handiwork” we are tasked with here on this planet.  We know that what we do means a lot because everything is important to continue this cycle of life.  We know that we are important and the One who made us lives all around us.  We know there is more to life than what we are doing.  We sense it.  We feel it.  And occasionally we capture a glimpse of heaven — if we take the time to stop our “handiwork” and see it.  Watch for it.  Be a part of it.  Let our soul be refreshed by soaking in it.

There were 200 people who felt a tug from heaven and I am so happy iPhones were invented to capture the glory of God so quickly.  The “handiwork” of Steve Jobs made a difference and you just never know – your “handiwork” just might also.  And how awesome is it that a man named “jobs” helped capture God’s handiwork!

Not only is our God awesome…He’s got a really great sense of humor naming Steve Jobs to create the ability to capture God’s handiwork!

As you head off to day two of your “handiwork” for this week, don’t forget to look up and declare His glory.  You may not see a sunset but I will guarantee you will see something.  There are trees, birds, blue skies, rain drops, clouds, animals and people of all races and all nations.  All of God’s handiwork is right there for you to see, touch, feel and snap a picture or two.

There is glory all around us declaring God’s handiwork.  Don’t get bogged down in your handiwork and miss it.

P.S. — this picture was not photoshopped.  It’s the real deal and so is God!