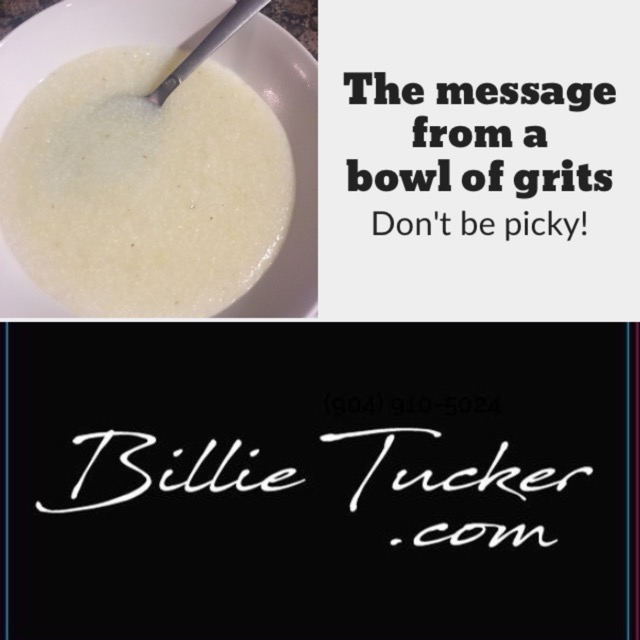 I was preparing a bowl of grits and my mind wandered back to my precious mother-in-law.  She was a southern belle and passed away in 2012 at the age of 87.  She so wanted to make it to her 90th birthday but cancer took her before she could.

She loved grits.  It was her favorite breakfast food.  She lived with us for 10 years before she passed and I had to bite my tongue many mornings while she stirred her grits.  You see…my mother in law was a perfectionist.  Big time!  Everything in her life had to be just “so so” and people who worked with her could tell you stories of her “pickiness.”  That worked well in the business world but watch her pick her grits and it could cause you to spit your coffee.

Her ritual was to stir the grits until extremely smooth and then — here it goes — pick out the small black specks that the corn had left in the white grits.  She picked and picked and picked until she was satisfied they were all gone.  Then she put a large dab of butter in the bowl and the grits became perfect!

When she became ill and was unable to fix her own food the last couple of months of her life, I took on that responsibility.  I remember how nervous I felt as I creamed her grits and then stood there picking the dark bits out of the white grits.  It appeared the more I picked, the more the black bits appeared out of nowhere.  It was a grueling way to start my day but I loved her so much and knew how important it was to be picky with her grits.  I wanted to please her and this was one way to do that.

One morning I knew her time with us was getting shorter and the thought of losing her had me crying over her bowl of grits.  I picked and picked to make it perfect and still felt like a failure when I was done.

When I walked into her room with the beautiful bed tray and the bowl of grits loaded with the dab of butter, I said, “Mother, I tried so hard to get the dark bits out.  I don’t know how you did it.  I can’t seem to do it like you do.”  Tears were falling from the corners of my eyes and although I tried to hide them, she saw them too.

As I put the bed tray across her lap, she grabbed my hand and said, “Oh Billie, I wasted too many years pickin… my grits.  I now know how silly it was for me to be so picky about things. If I could do it all over again, I would have learned to let some things go.   I know you tried your best to please me and you always did.  The grits are perfect. You are too.”

We had a big cry together and a month later she was feasting at the table of her Lord with the purest of grits she had ever seen.

As you approach this new day, keep in mind her words about being “picky.”  There are some things that require you to be that way and other things that will drive others around you a little crazy and you too!

Pick your pickiness!  Choose what requires this great trait of yours and let the other things go.

So who would have known that a bowl of grits would be a blog post?  Only God — because He can take anything and make it a message!

Have a great day and eat your grits — including the dark bits!